Before The Power Game.... 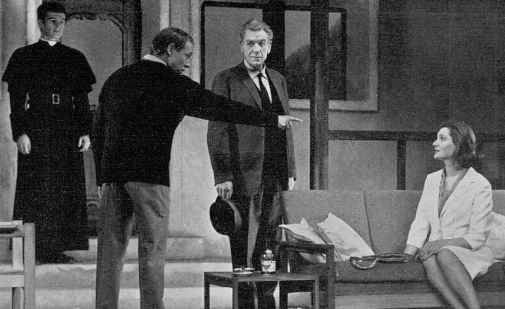 Newlywed Daniel Corbin (Michael Bryant) reports his wife missing, saying she stormed out of their chalet in the French Alps after an argument. After three days, the local policeman (Andre Morell) is unconcerned, saying she will come back when she cools down. As if to prove the policeman's words, a young priest Father Maxim (William Holmes) brings Florence Corbin (Barbara Murray) back to the chalet. But Daniel says the woman is not his wife.

Trap For A Lonely Man was written by French dramatist Robert Thomas and first performed in Paris in 1960 under the title, Piege Pour Un Homme Seul. The play caught the attention of Alfred Hitchcock, who announced in September 1960, that he would be making a film version for 20th Century Fox the following year. It's not known why Hitchcock dropped the project, although it's an interesting coincidence that one of the producers of the British production was Harry Saltzman, of James Bond fame. The translation by Lucienne Hill and John Sutro was first performed in a provincial tour, starting on 10 September 1962 at the Palace, Westcliffe, with Robin Lloyd as Corbin, George Waring as Father Maxim and Ingrid Bourke as Florence. The West End production was directed by Harold French (French Without Tears, The Man Who Watched Trains Go By) and had its first London performance at the Savoy Theatre on March 5th 1963 (Perhaps in order to ensure that the ingenious plot was exploited to the full, the play continued to tour throughout the provinces with alternate casts thoughout 1963.

In the play, an increasingly frustrated Corbin tries to convince the policeman that the woman is not Florence, even though she provides details that only a wife could know. And a nurse (Pat Nye) and artist (Patrick Newell) both identify Florence as the woman they met a few days earlier as Mme Corbin .

For Barbara Murray this was a strong part, building on the capacity for ambiguity she had demonstrated in The Collection, and The Wife of Bath.

The reviews were divided. The Stage noted that, "the audience laughs at the most dramatic moments," and the dialogue was criticised. But in the Daily Herald, David Nathan concluded that, "The twist in the tale is not only ingenious, it is downright deceitful." and J.C. Trewin agreed that, "anyone who left three minutes before the end would have had an extremely wrong notion of the piece. That is the kind of construction we need in a puzzle."

Michael Bryant had already attracted notice from critics in Peter Schaffer's Five Finger Exercise (1958) and for succeeding Alec Guinness as T.E.Lawrence in Ross (1961). He was praised here for conveying the sustained and growing hysteria of a man who persists in maintaining, in the face of all evidence that he is the victim of a conspiracy. The Stage conceded that the whole cast, act hard to make the piece work. J.C. Trewin agreed that "Andre Morell, Michael Bryant, Barbara Murray and William Holmes achieve without flaw the exposition and the resolution of an admirable puzzle." 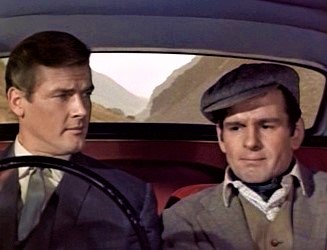 Roger Moore and William Holmes in The Saint

Thankfully, although successful, the play did not run long enough to prevent Barbara Murray taking on the role of Pamela Wilder in the first episode of The Plane Makers in September 1963. As Barbara Murray later married William Holmes it could also be said that this tale of marital strife did have a positive outcome. William Holmes had previously been appearing as Warbeck in The Witch of Edmonton at the Mermaid Theatre. He would go on to appear with Tony Beckley and John Fortune in the BBC revue series Dig This Rhubarb (1964). His last role before retraining as a school teacher was that of Angus McGraw, the Bastien's gamekeeper in the classic Saint episode The Convenient Monster(1966). 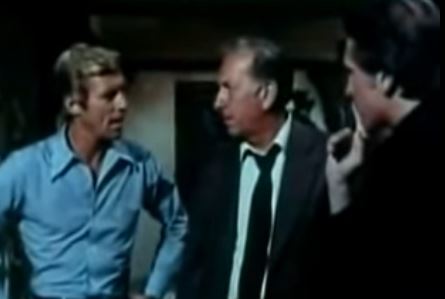 James Franciscus, Jack Klugman and Joel Fabiani in One Of My Wives Is Missing

Hitchcock never did get round to making his film version, but 20th Century Fox retained the property. In 1976 it was filmed as a TV Movie by Glenn Jordan.One of My Wives Is Missing starred Jack Klugman as Inspector Levine, James Franciscus as Daniel Corbin, Elizabeth Ashley as Elizabeth Corbin and Joel Fabiani as Father Kelleher. The teleplay was adapted by Peter Stone (Charade) under his pseudonym of Pierre Marton and maintained the suspense of the original play. With music by Billy Goldenberg, it still holds up as one of the classic TV movies.

Return to The Barbara Murray page