“If Whitehall had run Dunkirk, we’d never have got a boat out!” Sir John Wilder.

Sir John Wilder is recruited by the Government as a Special Envoy – the Ambassador for Special Situations and Trade - with the newly ennobled Lord Bligh as his Minister. In his first mission, Wilder has to return to the African state of Malia where a British copper mine has been seized and its engineers imprisoned. 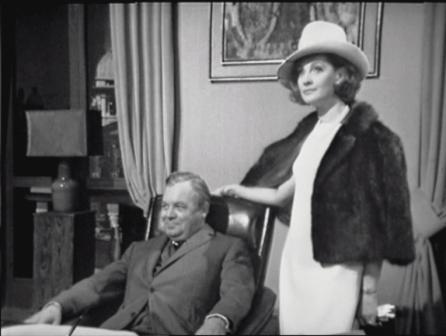 Original producer Rex Firkin had moved from ATV to London Weekend TV, so director David Reid was promoted to producer of the third series. Together with script editor Wilfred Greatorex, his first task was to pull together characters from the last series, introduce a new situation and resolve everything in the space of an hour. The Special Envoy format had been devised by Greatorex and announced as a standalone series before a clarification was issued that this would be the third series of The Power Game. Whether this points to some behind-the-scenes negotiation on Greatorex's part, or uncertainty over whether the now highly-paid Wymark would return is unknown. But each episode would be billed with the Special Envoy strapline.

Like magicians, Reid and Greatorex used a bit of misdirection when they set the situation up by calling attention to the implausibility of it. Having decided to bring both Sir John Wilder and Caswell Bligh back, they have Arthur Stilton (Geoffrey Chater), the Foreign Secretary, remind Caswell Bligh (Clifford Evans) that he and Wilder, “practically hacked one another into a communal grave,” and question why he should suggest Wilder as his Special Envoy. In a similar vein, the need to bring Jack Watling back means Don Henderson’s partnership with Ken Bligh has to be in (plausible) trouble. Wilder can guarantee a year’s work for the company if Don agrees to come on board as his Personal Assistant. And Ken Bligh just happens to have the secret information that will help Wilder resolve his first mission. 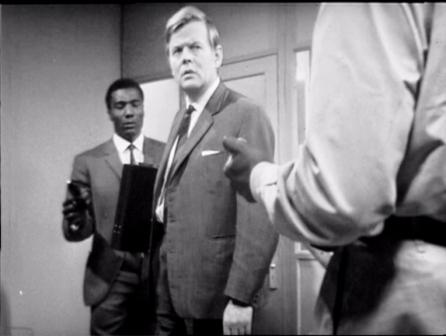 The first and second series of The Power Game had taken place against the background of Harold Wilson’s Labour administration. The third is set firmly within the Government arena. Thankfully the “tired and emotional” George Brown had resigned as Foreign Secretary in March 1968, replaced by the more anonymous Fulham MP, Michael Stewart. Geoffrey Chater’s patrician “Arthur Stilton” appears to be more in the vein of The Plane Makers' all-purpose anonymous Ministers rather than an approximation of the present incumbent. Writing in The Times , former Conservative MP Julian Critchley found the first episode, “a victory of competence over content,” with the situations,“sufficiently authentic to deceive all save those who have actually taken part in them.”

Greatorex opens the episode with Sir John Wilder triumphantly returning to London airport after winning an Ł80 million contract (the Kabala Hydroelectric Scheme) for a French company. It therefore builds on the ending of the previous series where Wilder helped a German company acquire Bligh Construction’s stake in the European consortium. Wilder appears to have kept busy in the past two years and cheerfully agrees to boost his image by giving an impromptu press conference at the airport. Writing in The Times, Julian Critchley commented that, “the opening sequences of a jet landing at Heathrow (with the camera tracking) Wilder as he heads triumphantly for the press room could not fail to win the viewer’s attention.”The reporters ask if Wilder should have helped the British firms competing for the contract, and whether he thinks what he has done is patriotic. Wilder replies: “Put that to the four-hour-a-day national heroes who represent us abroad. Who don’t know the difference between a contract and the Boys Own paper. The deadbeats who think work is cocktails at sundown. The pension seekers. The time servers. The civil servants living it up on the gravy train. “ 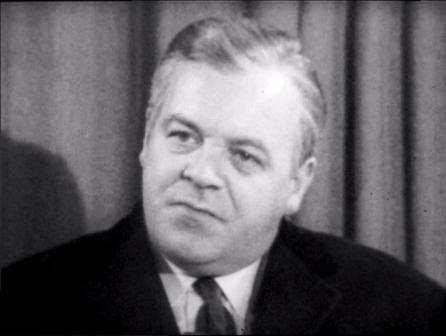 In the Foreign Office, Arthur Stilton dismisses Wilder as a “Little Napoleon” and asks why Caswell Bligh should suggest Wilder as his projected Ambassador for Special Situations and Trade. Bligh replies that Wilder will “put bombs under those featherbedded nonentities we’ve got around the world.”

Apart from a line about Stilton and Bligh being old friends, Greatorex does not explain how Bligh became so influential – by the end of the scene it becomes clear the Bligh has already been lobbying the Prime Minister about Wilder’s appointment. When Stilton says he’s surprised Bligh didn’t want to be the Ambassador himself, Bligh replies gravely that he knows what job HE wants. Perhaps this is all part of the “recognition” that was promised to Bligh when the National Export Board was wound up at the end of "The Power Game" because soon after Wilder’s appointment, Bligh is announced as the new Minister for Special Situations and Trade, a position which brings with it a life peerage. “We make a great team,” Bligh tells Wilder, “and you were told there’d be strings.”

”Strings yes, “ Wilder shoots back, “But not a noose!”

However, Bligh soon talks Wilder round, promising him “a whole world to go at – and Ambassador status.” So when Sandy Warren of “The Globe” telephones for a quote, Wilder assures him that, “I wouldn’t have taken the job without knowing (that Bligh was the new Minister) . He’s getting a bit long in the tooth and in need of support!” 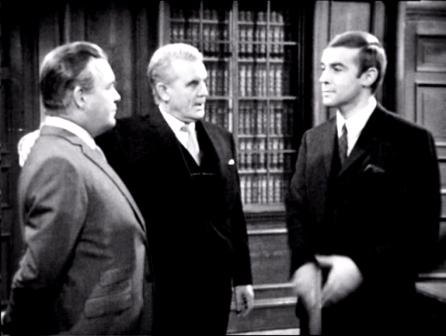 Wilder swiftly recruits Don Henderson as his PA, but Lord Bligh introduces him to Lincoln Dowling (Michael Jayston) who will be Wilder’s Private Secretary. Dowling is a cool young civil servant who will show him how Whitehall and the Diplomatic Service works. Although Wilder suspects that Dowling has been put in place to keep an eye on him, Bligh promises that, “this department is not rich in men of Dowling’s calibre.”

We soon see Dowling defending Wilder to the Permanent Under Secretary, Jason Fowler (Richard Hurndall) who says “Our service has no place for men like Wilder. They’re motivated by greed. Security risks all of them.” Dowling counters that Wilder “has all the money he’ll ever need. His kick is Power.”

“I smell scandal” Fowler insists. “You never did with Philby” Dowling replies, setting up a running gag for the series. Hurndall looks hurt. “ That was rather below the belt.” 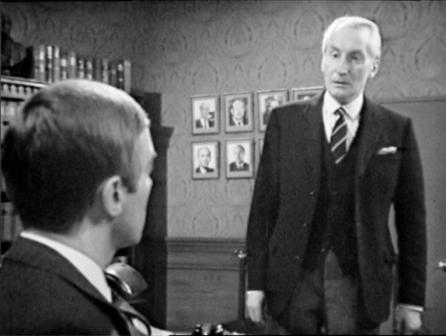 Lincoln Dowling was the first prominent TV role for Nottingham-born Michael Jayston, who had trained as an accountant with the National Coal Board, before deciding to become an actor. Like Wymark he was a member of the Royal Shakespeare Company, with recordings of “The Power Game” fitting in with performances at the Aldwych.

Jayston had previously been cast by David Reid in The Curtis Affair , a play by Wilfred Greatorex which went out in the “ITV Playhouse” strand in January 1968. A comedy about a managing director who has to explain to the Public Accounts Committee how his firm made a large profit on a Government contract. Starring Andrew Keir and Geoffrey Bayldon, it was a comic re-tread of the theme behind the penultimate episode of the second series.

The character of Dowling was a new and ambiguous quantity. As a civil servant he has a separate career path with the knowledge and connections to either help or hinder Wilder. By the end of the episode he has subtley acknowleged the attractions of Lady Wilder.

With Norma Ronald working in Gerry Anderson’s “UFO” and also giving birth, Miss Lingard is understandably absent from this series. It seems unlikely that such a compentent perosnal assistant would have been without a job for long. While Lady Wilder picks up on some of Lingard’s duties (arranging the redecoration of Wilder’s gloomy Whitehall office), Lincoln Dowling provides the professional assistance that was once part of Kay Lingard’s role.

Dowling briefs Wilder on his first mission in the African state of Malia. After Britain cut back international aid, the Government turned to Chinese investment. Britons are having their property looted and are being attacked on the street. A British copper mine has been confiscated by the Government and an aircraft sent in by the mining company has been detained with the engineers arrested. Wilder’s job is to get them out.

The state of Malia represents the biggest slight of hand in this episode. Caswell Bligh tells Wilder, “I remember how much it cost Bligh Construction the last time you went there” and part of the plot turns on Ken Bligh divulging the route by which he bribed Government minister Naranda (Bari Jonson). But in the second series, Bligh Construction went to MaGalia and Ken Bligh was tricked into offering a bribe to another Minister(played by Calvin Lockhart). The bribe was refused and Ken was expelled. Bari Jonson played Abina, the Charge d’Affairs at the Magaian embassy, while the Minister Bobo Naranda was played by Frank Cousins. It may be possible to construct some rationalisation that Bobo Naranda has become the unnamed “Premier” in this episode (played by Yemi Ajibade), that he re-named Magalia after taking power, and that after the coup Ken Bligh was invited back in order to bribe Naranda’s brother-in-law. But it's equally likely that with “The Power Game” never being repeated in the 1960’s, Wilfred Greatorex gambled on the audience only having a hazy memory that Bligh Construction had visited an African state two years before, and recast the facts to resolve the new story.

The “One Via Zurich” of the title is the air ticket for Don Henderson (Jack Watling). On Wilder's instructions he takes up Ken Bligh’s introduction to Swiss Banker Preston Lockwood who facilitated the originalbribe to the unknown Malian minister. As Henderson flies to Malia with a clue to the Minister's identity, Wilder ruthlessly blows Don’s cover. Don is intercepted at the airport by Malian Special Branch officers and a deeper level of deceit is unveiled which allows Wilder to negotiate the release of the hostages.

It’s hard to imagine how this episode must have appeared to contemporary audiences. There’s an inevitable sense of artificiality to the set up of this new series which lacks the seamlessness of the transition from “The Plane Makers” to “The Power Game”. However, as opening episodes go, it still remains entertaining.