The Duchess of Malfi and A Question About Hell 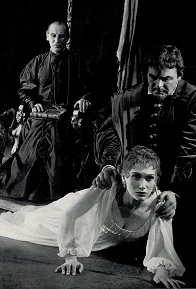 Peter Hall chose John Webster’s bloody tragedy, The Duchess of Malfi to open the Aldwych Theatre on 15th December 1960 as the London base of what was still then, the Shakespeare Memorial Theatre Company.

Based on the story of the real Duchess Da Malfa, Giovanna D’Aragona, the play relates the story of the widowed Duchess whose brothers, a Duke (Eric Porter) and a Cardinal (Max Adrian) insist she should not remarry. They place Daniel De Bosola (Wymark), recently released from a sentence on the galleys for murder, in her household as the Gentleman of the Horse in order to spy on her.

The Duchess woos her steward (Derek Godfrey, who would later play Dysart in Hands of the Ripper ) telling him that she has to make the first move because she knows he will never dare. Antonio and the Duchess marry in secret and have children, but Bosola betrays their secret to her brothers. The Duchess tells Antonio to escape with her eldest son, but she is imprisoned and subjected to metal torture by her brothers.

The play was a favourite of Peggy Ashcroft, who first played the part in 1945 at the Theatre Royal, Haymarket. As Michael Billington observed, the earlier production had, “opened at a time when the first reports of the survivors of concentration camps were being published in the papers (and) critics discovered a new seriousness in Webster’s blood-soaked tragedy.”

The stoicism of the Duchess in the last half of the play and the calculated passion in the first makes this a rare leading role for an actress where the female character drives the story forward. For Patrick Wymark, the character of Bosola was the most dominant male role in the play. Driven by ambition, aware that he inhabits a corrupt world, Bosola does the bidding of his villainous masters but constantly criticises and increasingly resents their actions. He’s as monstrous as Hank Quinlan from Touch Of Evil and only finds the strength to do the right thing when it’s far too late. 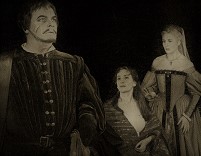 If Bosola is Hank Quinlan, then Julia is the archetypal femme fatale. Sian Phillips won acclaim for her role as the Cardinal’s lover, who betrays him in her passion for Bosola. Both Peter Jeffrey, who would play James Cameron-Grant in the third series of The Plane Makers and Wendy Gifford, who would play Laura Challis appeared in the cast. Designer Leslie Hurry devised a set dominated by grey stone paving and a backing of richly coloured drapes, to which servants brought furniture as required. The set was visible as soon as the audience entered the auditorium, an effect Peter Hall preferred because it allowed the audience to orientate themselves with the setting before the actor appeared, and then pay full attention to the lines when the action began.

Director Donald McWhinnie had been Assistant Head of Sound Drama at the BBC and had established himself with a successful stage version of The Caretaker. Humphrey Searle, who composed the atmospheric music, would later score The Haunting (1963) which he primarily remembered for “endless trips through ice and snow to Elstree” during that treacherous winter. Searle had been introduced to Patrick Wymark in late 1957. As he recalled in his autobiography Quadrille With A Raven , “Pat was then a member of the Shakespeare at Stratford but wanted temporary accommodation in London, as he was working on a TV Film during the day (possibly Black Arrow the first part of which was broadcast 19 January 1958) and playing Trinculo in The Tempest at Drury Lane at night.”

Searle lent Wymark his flat over a garage at 44 Ordnance Hill, St John’s Wood, while Searle moved into the Studio which was part of the building. Some years later, Searle was invited to be composer in residence at Stanford University for 1964-65. Olwen Wymark’s father, Philip Buck was Professor of Political Science at Stanford and offered a shack at the bottom of his garden to Searle and his wife, so that they knew they would have somewhere to live.

Although the play did not get a TV production, this does not appear to have been the last of Wymark’s association with The Duchess of Malfi 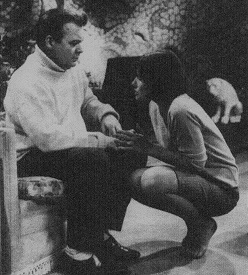 The first segment of Granada TV’s new strand of plays under the title of A Question of Happiness this was also the first TV play by novelist Kingsley Amis. The play, directed by Claude Watham was set in the West Indies and starred Caroline Mortimer as Angela Strachan, a wealthy young widow. Wymark starred as Alfred Colliver with fellow Royal Shakespeare Company player Richard Johnson as his brother Norman. Both are men of influence and power on the island, but reveal their true nature when their free-spirited behaviour sister falls in love with servant Kenny Lynch.

The setup is very reminiscent of The Duchess of Malfi. Amis told the TV Times that he’d set the play in the West Indies because that meant “colour and race can be part of a play without anyone supposing it to be about colour and race.” The setting also possibly also allowed Amis to replicate a situation where two men could wield untold power. Broadcast less than a month after the second series of The Plane Makers had ended, this gave the viewers their first chance to see Patrick Wymark in a very different role from John Wilder. Like the Duke, Alfred Colliver is weak and possessive, while his brother Norman is cool and repressed. Although Clifton Jones played a chauffeur (Gentleman of the Horseless Carriage?), it seems more likely that Mike (Randall and Hopkirk) Pratt as the sleazy nightclub owner Lopez was the play’s Bosola figure.